Selecting An Architectural Style for Your Home 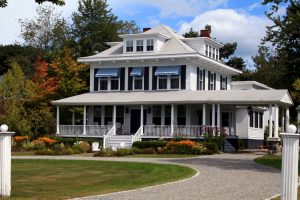 The architectural style of a home is often highlighted in its online description to help buyers understand its features. But if you don’t know your Tudor from your Craftsmen Bungalow, don’t worry. We can help you sort it out with this condensed “cheat sheet” designed to help you determine what style of house you want or what type you’re currently trying to sell to potential buyers.

Cape Cod
Popular in the 1930s, Cape Cod homes are usually one-story houses with wood siding, a steep roofline, multi-pane windows and hardwood floors. While most Cape Cod homes are fairly small, many have dormer windows and often these upstairs spaces can be finished or remodeled to give you more square footage or storage space.

Colonial
Colonial is the most popular style of home in the United States and typically has two to three stories, brick or wood exterior, and a fireplace, with the kitchen and family room on the first level and bedrooms upstairs. If the house is symmetrical and has evenly spaced shuttered windows, there’s a good chance it’s a Colonial.

Craftsmen
This type of house became popular during the Arts and Crafts Movement, when the focus was on natural materials like wood, brick and stone. Known for their charming front porches and open floor-plans, Craftsmen homes also tend to have fireplaces, plenty of woodwork and built-in shelves and seats, exposed beams, and decorative braces under the gables. Craftsmen homes also have unfinished but useable space in the attic.

Tudor
The name sounds like it’s derived from the Tudor Dynasty, but today’s Tudor houses are a more modern take on the late Medieval English style. You’ll be able to spot a Tudor easily because of its incredibly steep roofline, narrow windows and half-timbers added for decorative effect. This style of architecture is perfectly suited for snowy and rainy climates.

Victorian
Named for Queen Victoria, this style originated in the 1800s and is all about beauty, sometimes at the expense of functionality. Victorian homes tend to be asymmetrical, ornate, and feature multiple rooflines, a front porch, bay windows and patterned shingles. This romantic style also spawned other similar styles such as Queen Anne, Romanesque and Gothic Revival.

Federal
Often called the first pure American style of architecture, the Federal style home is almost always made of brick and has a high, impressive façade with tall windows placed symmetrically on either side of the front door. Look for the fan-shaped, semi-circular window that usually sits atop the front door.

Ranch
This style developed as builders imitated Western ranches. These more modern homes feature open floor plans with easy access to the outdoors. First seen in the 1930s, the popularity of this style exploded during the building boom of the 1950s and 1960s in American suburbs. It’s a great choice for buyers who want to upgrade or expand with a home addition.

For more information about the different architectural styles in our area, please contact me.