In the wake of current development and the continual rise of real estate prices and rental rates, what does the future hold for the Santa Barbara’s trending Funk Zone neighborhood?

Covering a 16-block waterfront area bordering lower State, Garden, Yanonali, and Mason streets, the Funk Zone was originally designated as a marine industrial and manufacturing hub. However, recent zoning regulations in favor of mixed-use development have opened the door for several other forms of business including restaurants, bars, condominiums, galleries, hotels, event spaces, and [most notably] Santa Barbara’s famed Urban Wine Trail. This influx of business has impacted more change in the area over the past 12 months, than its entire 18 years of existence!

Where did the Funk Zone get its name?

In the mid-1900s the Funk Zone was the industrial marine manufacturing Mecca for Santa Barbara. According to Santa Barbara’s Independent Magazine, during this era, the word “funky” was used by several planning authorities to describe the menagerie of land uses in the area. According to the Santa Barbara Independent, planning officials proposed the area should encompass art-friendly zoning regulations and embrace an eclectic environment designed to cultivate such ambitions. By the mid 2000s, Santa Barbara city officials decided to adopt a code that required new developments in the Funk Zone to either be tourist serving in nature, mixed-use residential or commercial units, or marine-oriented light manufacturing.

Changes on the Horizon

In the midst of new construction and large commercial properties changing hands, is it possible for the Funk Zone to retain the local charm that has distinguished it thus far? Or will the bell of opportunity chime in favor of conglomerate hospitality and retail brands that have yet to recognize the opportunity for substantial profit margins?

Following 12 years of negotiations with the city, the La Entrada Project was approved in late 2013 to build on three parcels and 2.27-acres of land at the gateway to Stearns Wharf  – central to the Funk Zone. Officially known as “Entrada de Santa Barbara,” plans encompass a 114-room luxury hotel, nine fractional vacation units, and 21,557-

sq.-ft. of retail space with open plazas, paseos, and gardens designed in Santa Barbara’s quintessential Spanish Colonial Revival style. The project has received approval from the Santa Barbara Historical Landmarks Commission and is being designed by our own homegrown architectural firm, DesignARC. The development will feature a combination of original, preserved and restored façades as part of the rebuild.

According to the Santa Barbara City Planning Division, “Building permits for the La Entrada Project must be obtained by Nov. 15, 2014 and should be completed by June 30, 2016.”  Additional land and commercial buildings that have been sold include the Bekin’s Storage Building for $25 million that has since been leased to Sonos Wireless Hi-Fi.

In 2013, Mesa Lane Partners, LLC acquired the largest single tract of land available in the Funk Zone. This historic property is currently under City planning review to be transformed into a vibrant, adaptive-reuse development complete with mixed-income multifamily housing as well as spaces for retail, a restaurant, cafes, and office space.

City officials have hailed SoMo as “the most exciting new project in the Santa Barbara’s history.” Upon completion, this high-profile development will provide Santa Barbara with 64 new apartments, over 50,000 square feet of new commercial space, and a designated “Art Village” comprised of workshop/studio spaces for the local arts community.

Mesa Lane Partners has assembled and acquired one of the largest single tracts of land in the highly sought-after downtown waterfront area, presenting a unique opportunity for a small group of accredited investors to co-invest with Mesa Lane Partners and enjoy an equity interest in an extraordinary community serving development located in an extremely high barrier to entry market.

The redevelopment of the Property will transform nearly an entire city block into a vibrant neighborhood center with beautiful places to live, work, play, and learn. 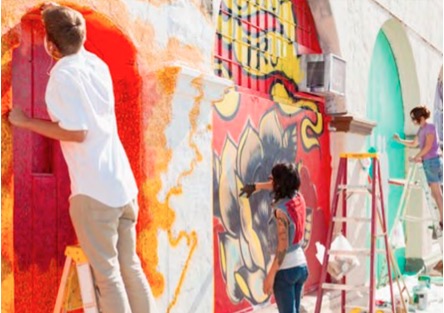 MOXI, The Wolf Museum of Exploration + Innovation, is in process of constructing a world-class museum from the heart of downtown Santa Barbara on lower State St. MOXI will offer awe-inspiring, one-of-a-kind experiences that unite learning and play to actively engage young minds. Through hands-on exhibits powered by science, technology, engineering and math, MOXI will equip the next generation of innovators and problem solvers with the creativity and critical thinking skills they need to be successful in the global marketplace. The museum will include 17,000 square feet of interactive educational exhibits, a rooftop Sky Garden, Smart Classroom, and Museum Store.

What Does The Funk Zone Stand For?

So What Does The Future Hold For The Funk Zone?

From a local’s perspective, the Venturelli Group wholeheartedly supports conscious development and positive energy surrounding the Funk Zone.  We are grateful that many local businesses are pioneering these large commercial endeavors. It is heartwarming to know that the collective mindset is geared towards embracing local culture and promoting the natural assets that make Santa Barbara the paradise we know and love. These are very exciting times in the Santa Barbara Waterfront District and we are fortunate to be involved! Please reach out to us directly 7 days a week at (805) 680-5141 or email Gabe at the Venturelli Group to learn more about the development and real estate opportunities in the Funk Zone, West Beach, and the SB Waterfront District.