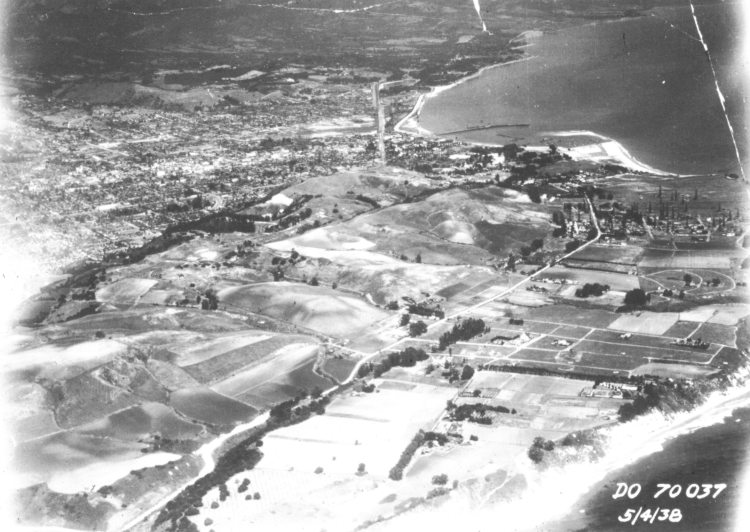 Boom or Bust: A hundred years ago heralded a surge of residential development brought about by the discovery of the allegedly prodigal Mesa Oil Field.  Homes sprouted up overnight and were interspersed among a sea of oil derricks that dotted the Mesa coastline.  While productive pockets of oil were discovered, the Mesa turned out to be no more than a flash, resulting in a halt to construction and people walking away from their investments. Little did they realize that the real value was in the land itself and not underground.

Forward to the 1950’s, the bustling post World War II economy spurred a reinvigorated boom in development on the Mesa as housing demand grew and the Marine Terrace was developed. It was the first large scale subdivision in 1951 – 1954 that Santa Barbara had seen, with favorable VA loans attracting G.I.s to the Mesa.  There were 502 newly minted homes for $9,900 (two bedrooms) to $11,400 (three bedrooms) satisfying demand for suburban living.

The prime ocean frontage in front of the Marine Terrace along old Bluff Drive was left vacant as the developer’s dream of hotels and restaurants languished without city approval. In 1967, the voters approved a one million dollar bond to purchase the 15 acres between Shoreline Drive and the beach, to create Shoreline Park. It’s now considered one of the premier parks in Santa Barbara.

To the rest of the Santa Barbarians the Mesa had the reputation as undesirable, too distant from downtown, foggy, ridden with salty fisherman, long haired surfers and youthful mesa rats that had sought a haven for a beach lifestyle. Why would anyone want to live up there? Those of us living here knew exactly why.

With the capping of the final oil well in the mid 1970’s more residents began to acknowledge the Mesa for its optimal climate, natural beauty, and proximity to the ocean. Prices had increased for 3-bedroom homes to a whopping $20,000 – $45,000. As 1985 approached prices had creeped upwards to $200,000 and homeowners began renovating to take advantage of the inspiring ocean views. Limited city restrictions didn’t hold back the size or design with many second story permits approved over the counter on the day of submission.

The respective dot-com and housing booms of the 1990’s and early 2000’s inspired an incredible surge in home values in the range of $700,000 to over $1,000,000!  Bluff top homes in particular were valued at more than double these prices. Just one sale could surpass the original 1 million dollar cost of Shoreline Park in 1967.

Today the Mesa is in cadence with the rest of Southern California’s beach communities as property values have reached all-time highs with over 30% appreciation over the last 3 years. The Mesa is still a great comparative value however. Thus the race is on: With property values rising and interest rates affordably low, it’s a good time for residents to buy, sell & trade-up, or remodel the Mesa home of their dreams so as to continue the legacy of the “Mesa Lifestyle”.